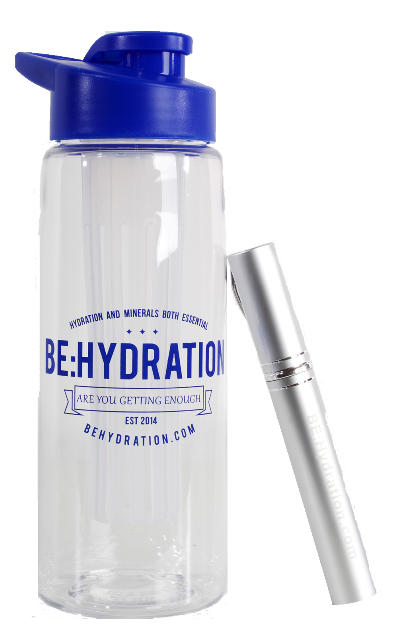 BE:Hydration opened its doors in 2014. However, my BE:Hydration journey began back in the year 2000. I first heard Tony Robbins talking about acid and alkaline in the body and it really struck a chord in me. I could relate to it because, at the time, I had such a poor diet – I was living a fast-paced lifestyle and had chronic heartburn. I knew my body was acidic and it needed to be more alkaline.

Years later I discovered a Korean technology which infused minerals with water – an alkaline stick. Again, it struck a chord in me, so I tried it out. I loved it! It was smooth, silky, easy to drink, but what surprised me most was my heartburn virtually went away! Another thing that blew me away was my wife, Barbara, began to adapt to drinking water regularly. She didn’t like drinking water and she refused to drink it. It made her feel bloated; she said it felt heavy in her stomach and she just didn’t like it. However, after a week of me drinking this new water, I caught her drinking out of my bottle! I said “baby that’s not a wine bottle! Why are you drinking that?” And she responded, “I like it. It’s smooth and silky and it doesn’t sit heavy in my stomach!” I was shocked! Here was a woman who refused to drink water and now she was. That impressed me.

Not too long after that I was at my son’s school. He is autistic and works with an aid. I noticed she was drinking a product called Aquahydrate. For those of you who don’t know, it’s an alkaline water that Mark Wahlberg and Sean Combs are behind – and it’s about $3 a bottle! When I saw her drinking it I asked, “why do you drink that?” She responded, “I know it sounds weird, but it’s the only water I can drink!” I asked, “why is that?” and she told me, “it doesn’t bother my stomach.” She then pointed at my bottle and asked, “what’s that?” I told her it is an alkaline stick – and it does the same thing as the water you’re drinking for $0.02 a liter not $3 per liter. Her eyes widened and then asked me if she could get a stick. I dropped one off to her the next day. Five weeks later we were at parent – teacher interviews. Our aid was there, and she could not stop raving about the alkaline stick. She said “Oh my God. Thank you, thank you, thank you, I love my water! I drink so much of it now! I have more energy, my skin feels great, it doesn’t bother my stomach and I am actually losing weight!” At that point I knew I was onto something.

Over the next while I had a small circle of friends try this “new water” and again everyone was impressed with the results. I then began appearing at local farmer’s markets to do some test marketing for 5 months and I had such an awesome experience! I had people coming back to tell me about the results they had. Some told me how their blood sugar levels were dropping; some were telling me how their blood pressure was coming down; some were telling me about losing weight; some were telling me about not having to take acid reflux medication. Every weekend I heard all these wonderful stories. I knew then I had to share this with the world and help people. And that how BE:Hydration began.

This site uses Akismet to reduce spam. Learn how your comment data is processed.